When I was a young ministry student I was torn about my desire to attend a real college or to continue on with a seminary program I was being pressured to renew with. One night I prayed from dusk till dawn in the church sanctuary with praise and worship music playing and me begging God to say something.

I was a bit of a romantic and an idiot.  I received nothing for hours as I was sitting there on the floor of the sanctuary, looking up at a backlit cross on the wall above the podium at the front of the church.  Then a thought came to me.  The only light in the room came from the backlight behind this big cross on the wall.  The notion that came to me was more of a question, “What material is that cross made of?”

I hadn’t realized that I had no idea what the massive cross on the wall of the sanctuary was made of.  Even though I sat through countless sermons and events in this room and must have seen the cross a thousand times, I could not answer this question.  I did not know if the cross was wood, metal, or any other material.

Then the thought occurred to me, “You will never know what is ahead of you, but if you keep your eyes on the light you will get where you need to go.”

This was a beautiful revelation, and as I sat there thinking about it, I realized this was the first time I had heard God speak to me.  I understood what he was saying.   I did not know what the material of the cross was made of because the light behind it blocked the crosses material from view; I would not be told what comes next in my life, I just had to follow the light.  I had to trust that there was a light and if I kept my eyes on the light I would get there; wherever “there” is.  I decided to forgo college and finish the next two years of the seminary program.

Well, nearly 30 years later, I can say I have done my best, in spite of significant obstacles, to follow the light.   I struggled to follow what I understood to be the light.  I can also say I am pretty pissed that the light turned out to be nothing more than a mirage.  I was a romantic idiot who was willing to follow ambiguous direction from something just as vague and peripheral.  I was a small fish in the deepest parts of the dark ocean following a beautiful light and thinking it is something awesome just before the faint appearance of the sharp protruding fangs and teeth of the Anglerfish.

I think receiving messages from God can be inspirational, it certainly inspired me to follow.  However, as this journey is an endeavor, to be honest, I wonder now how much of that message received in the sanctuary was hearing God and how much was just my wanting to hear anything.  Looking back, it is always easy to question.  I may just need to hold on another 30 years until it all makes sense and gods plan is revealed.  Or, I may wait for another 30 until something finally goes my way and then I can say Gods plan has finally been revealed.  In either case, it is the interpretation of the human that determines whether it is a god.  It is not God himself; this is a problem for me in my current state of mind.   Humans can be snakes; they can mislead us, take advantage of us and destroy us.  But the most deadly and misleading snake in my life may actually be me.

*** Excerpts from the Book Gods in the Garden 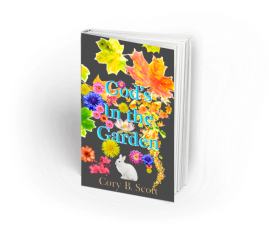 Gods in the Garden, Uncategorized

Dr. Cory B. Scott has had an adventurous career that has afforded him the honor of such titles as Reverend, Deputy, Executive, Director, Lieutenant, Doctor, and finally, his true passion, Professor.

But those titles were just masks; his official titles are, Daddy, Husband, Brother, Friend, Uncle, Mentor, and finally, in 2019, he was awarded his true love, Grandpa.

Cory has survived some devastating tragic events and personal failures in his life. These experiences have given him deep insight and a desire to help others overcome personal obstacles and transform their tragedies into sacred gurus who teach and strengthen.

Cory weaves original artwork, poetry, and short stories in an incredible memoir titled, "Gods in the Garden." This book captures the essence of a survivor's journey through abuse, pain, loss, betrayal, and enlightenment.